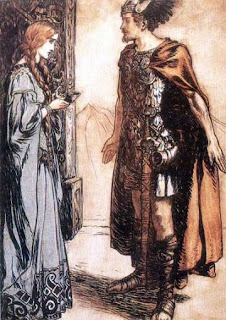 A description of Sigurd the dragon-slayer, from the Icelandic Volsunga saga - of whom it is said "when all the most famous men and kings in ancient tales are mentioned, it is Sigurd who must come first in strength and ability, in eagerness and courage, of which he had far more than any other man in Europe."

His shield was of many thicknesses. It was plated with red gold, and on it was pictured a dragon. Its upper part was dark brown, and its lower light red, and his helm, saddle and surcoat were emblazoned in the same way. His hauberk was of gold, and all his weapons were decked with gold. And the reason for the dragon being emblazoned on all his weapons was so that all those who had heard that he'd killed the great dragon the Vaerings [i.e. Scandinavians] called Fafnir would know on seeing him who he was.

And the reason for his weapons being all decked with gold and gleaming bright was that he far excelled others in fine manners, in all the social graces and well-nigh in everything. And when all the greatest heroes and the most famous leaders are spoken of, he is the one who will always be spoken of as foremost of all, and his name is current in all the languages spoken north of the Greek Ocean, and so it will be for as long as the world endures.

His hair, which fell in long locks, was brown and handsome to look on. His beard was short and thick and of the same colour. He had a high-bridged nose and broad, large-boned features. His eyes were so piercing that few dared look him in the face. His shoulders were so wide that to look at him was like looking at two men. His body was well-proportioned as regards height and breadth and just as it should be. And an indication of his height is that when he belted on the sword Gram - it was over five feet long - and walked through a field of full-grown rye, the scabbard-chape brushed the top of the standing grain.

And his size was outdone by his strength. He was expert in sword-play, in throwing a spear or hurling a javelin, in shield-work, in archery and in riding, and many and varied were the arts of chivalry he had acquired in his youth. He was a wise man, having foreknowledge of future events. He could understand the language of birds. And for these reasons there was little that took him unawares. He could speak long and eloquently, and if he started on a speech he never stopped until everyone saw that his was the only way possible. And he loved to come to the aid of his men, to tax his powers in dangerous ventures, to rob his enemies of their wealth and give it to his friends. He never lacked courage and was never afraid.

The Saga of the Volsungs, ed. and trans. R. G. Finch (London: Nelson, 1965), pp.41-2, which due to the wonderfulness of the Viking Society is available online here.

After Sigurd's death, an event I've written about before, "everyone who heard of these events said that there was surely not a man like him left in the world, and that never again would there be born a man such as Sigurd was in every respect, and his name would never be forgotten wherever German [i.e. the Germanic languages] was spoken, nor yet in the Northern lands, as long as the world endured."


These, then, were the qualities most admired by a thirteenth-century Icelandic author, in love with both the legends of the heroic past and the new world of courtly romance.
Posted by Clerk of Oxford at 3:36 pm