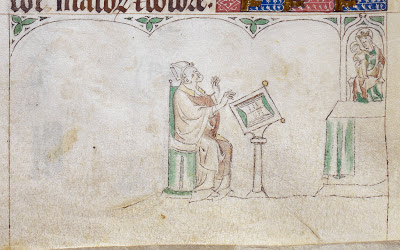 Dunstan having a vision of the Virgin, from British Library, Royal 2 B VII, f.228v

One of the most lurid stories about Dunstan concerns the consecration of young King Eadwig in 955: when the king was nowhere to be seen, Dunstan went in search of him and found him cavorting with a noblewoman and her mother. This is probably a scandalous myth, but it's true that Dunstan and Eadwig did not get on at all. According to Dunstan's first biographer, his fellow monks at Glastonbury were plotting against him too, and Dunstan was eventually forced into exile on the continent. And that's the context for the following dream:

The mercy of his God was with him, and he found favour with a local magnate, who looked after him with a father's affection during his exile. This nobleman's care saw to his everyday needs with all kindness.

Yet Dunstan's mind was constantly back in the land from which he had been expelled so remorselessly. Often did he lament, shedding floods of tears, whenever, now an exile, he recalled the grand religious life he had left behind in his monastery. He had long been taken up with doleful reflections of this kind, when lo and behold! he saw one night in his sleep a vision of the familiar scenes he so eagerly conjured up in his mind while awake. He was back in his familiar monastery, his band of brethren by him, singing Vespers, and, after the final canticle, 'My soul doth magnify the Lord', [they sang] the antiphon 'Wherefore did ye detract from the sayings of truth? You put together words to reproach, and strive to overthrow your friend. Yet...' At this point in Dunstan's dream, they all stopped singing at the same moment and fell quite silent, unable to find the voice or the words to finish the antiphon. And though they vainly tried again and again, they could only sing as far as the same place as before, never able to add the two last words.

In his dream, Dunstan rebuked them: 'Why won't you finish the antiphon with "complete what you design"? From another quarter he at once heard the reply of God: 'Because, I say, they will never bring to pass what they are plotting, namely your expulsion from control over this monastery.' And waking up from his dream he gave thanks to the Almighty for consoling him.


It turned out all right for Dunstan: Eadwig only reigned four years, and was followed by his brother Edgar, one of Anglo-Saxon England's greatest kings and a firm supporter of the church. Under Edgar Dunstan became Archbishop of Canterbury; the service which Dunstan devised for Edgar's consecration is still the basis of the coronation ceremony for British monarchs, more than a thousand years later.
Posted by Clerk of Oxford at 11:55 pm