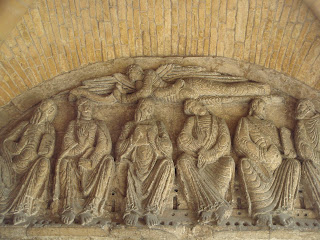 We celebrate the coming of the Holy Ghost with songs of praise for seven days, because he inspires our minds with sevenfold gifts: that is, with wisdom and understanding, with counsel and strength, with knowledge and piety, and he fills us with awe of God.

This is an extract from a sermon for Pentecost by the Anglo-Saxon homilist Ælfric, in which he reflects on the symbolism of the Holy Spirit appearing as a dove and as tongues of flame. It makes a nice companion to Ælfric's homily on Candlemas, where he also talks about doves and kindling, but for a different purpose.

The Holy Ghost appeared over the apostles in the form of fire, and over Christ at his baptism it appeared in the likeness of a dove. Why did it appear over Christ in the form of a dove? Why over Christ’s followers in the likeness of fire? We read in books about that kind of bird, that its nature is very meek, and innocent, and peaceful. The Saviour is the Judge of all mankind, but he did not come to judge mankind, as he said himself, but to save. If he had chosen to judge mankind then, when he first came to earth, who would have been saved? But he did not want to condemn the sinful by his coming, but wanted to gather them into his kingdom. He wanted to guide us first with gentleness, so that he might afterwards save us at his judgement. This is why the Holy Ghost was seen above Christ in the likeness of a dove, because he was dwelling in this world in meekness, and innocence, and peacefulness. He did not cry out, nor was he inclined to bitterness, nor did he stir up strife, but bore the wickedness of men in his gentleness. But he who at his first coming was gentle, so that the sinful might be converted, will give a stern judgement at his second coming to those who do not heed.

The Holy Ghost was seen as fiery tongues above the apostles, because he caused them to be burning with God’s will and preaching about God's kingdom. Fiery tongues they had when with love they preached the greatness of God, that the hearts of heathen men, which were cold through faithlessness and bodily desires, might be kindled to the heavenly commands. If the Holy Ghost does not teach a man's mind from within, in vain will be the words of the preacher proclaimed without. It is the nature of fire to consume whatever is near to it, and so ought the teacher to do who is inspired by the Holy Ghost: first to extinguish every sin in himself, and afterwards in those under his care.

In the likeness of a dove and in the form of fire God’s Spirit was manifested, for he causes those whom he fills with his grace to be meek in innocence and burning with the will of God. Meekness is not pleasing to God without wisdom, nor wisdom without meekness – as it is said of the blessed Job, he was meek and righteous. What is righteousness without meekness? And what is meekness without righteousness? But the Holy Ghost, who teaches righteousness and meekness, should be manifested both as fire and as a dove, because he causes the hearts of those men whom he enlightens with his grace to be blameless through innocence, and kindled by love and wisdom. As St Paul said, God is a consuming fire. He is a fire unspeakable and invisible. Of that fire, the Saviour said "I come because I wish to send fire on earth, and I want it to burn." He sent the Holy Ghost on earth, and he by his inspiration kindled the hearts of earthly men. The earth burns when the heart of an earthly man is kindled to the love of God, which before was cold because of fleshly lusts.

The Holy Ghost does not exist in his nature in the form in which he was seen, because he is invisible; but for the sake of the symbol, as we have described, he appeared as a dove and as fire. In the Greek language he is called Paraclitus, that is, Comforting Spirit, because he comforts the sorrowful who repent of their sins, and gives them hope of forgiveness, and lightens their troubled minds. He forgives sins, and he is the way to forgiveness of all sins. He gives his gifts to whomever he will. To some men he gives wisdom and eloquence, to some good knowledge, to some great faith, to some the power to heal the sick, to some the power of prophecy, to some the power to distinguish between good and evil spirits; to some he gives various languages, to some interpretation of various sayings. The Holy Ghost does all these things, distributing to everyone as seems good to him; for he is the Almighty Maker, and as soon as he enlightens the mind of a man, he turns it from evil to good. 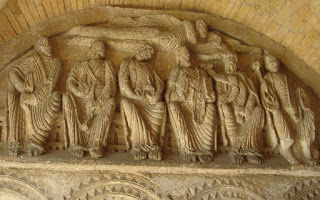 The Holy Spirit descending on the apostles at Pentecost, in Norman carving in the porch of Malmesbury Abbey

The Old English is:

You can read the rest of the sermon here. 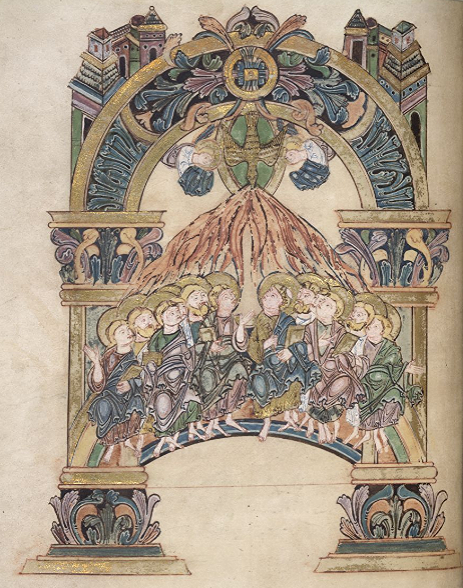 BL Additional 49598 f.67v
The passage on the gifts given to different individuals by the Holy Spirit (based on 1 Corinthians 12.4-13) is often compared to a section in the Old English poem Christ II, ll.664-683:

To one he sends wise speech
into his mind’s thoughts through the breath of his mouth,
fine perception. One whose spirit is given
the power of wisdom can sing and speak
of many things. One can play the harp well
with his hands loudly among men,
strike the instrument of joy. One can tell
of the true divine law. One can speak of the course of the stars,
the vast creation. One can skilfully
write with words. To one is granted success in battle,
when archers send quivering arrows flying
over the shield-walls. One can boldly
drive the ship over the salt sea,
stir the thrashing ocean. One can climb
the tall upright tree. One can wield a weapon,
the hardened sword. One knows the expanse of earth’s plains,
far-flung ways. Thus the Ruler,
the Son of God, dispenses to us his gifts on earth.

This is a mixture of the Biblical and the specifically Anglo-Saxon - climbing trees and sailing ships not being among the gifts listed in Corinthians.
Posted by Clerk of Oxford at 3:30 pm