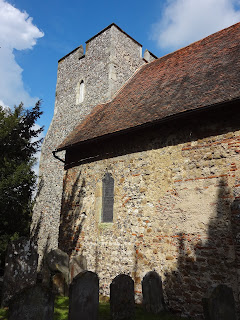 Here are some pictures from a recent visit to the church of St Martin's in Canterbury, said to be the oldest church in the English-speaking world which is still in use. It was already a church when Augustine arrived to convert the Anglo-Saxons in 597: it had been a Christian site in Roman times, and when the Frankish princess Bertha married King Ethelbert of Kent, the king, himself a pagan, gave his wife and her chaplain this church to worship in. 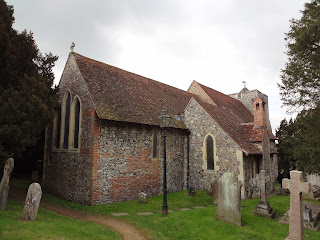 Our documentary information on this subject comes from Bede (who got it from informants at Canterbury about a century later). However, the archaeology of St Martin's supports what he says about its Roman origins. The red material in the church walls is apparently reused Roman brick: 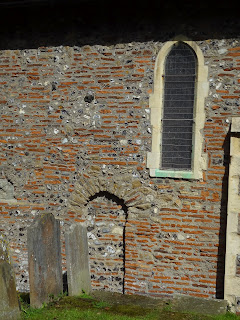 What's more, the fact that it was correctly known to be a Christian church in Ethelbert's time, centuries after the end of Roman occupation, suggests that there may have a small community of British Christians continuously worshipping at the site all through the intervening period. 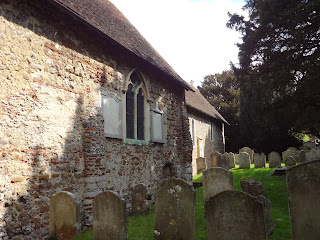 So this church has certainly been in continuous use for the past 1400 years, and perhaps for another few centuries before that. It's a little way outside the city walls of Canterbury, on the road that leads eastwards to the sea (roughly along the Roman road to the port of Richborough). The monastery of St Augustine's, about which I wrote recently, is on the same road, between St Martin's and the city.

You can see the towers of the cathedral from the churchyard of St Martin's: 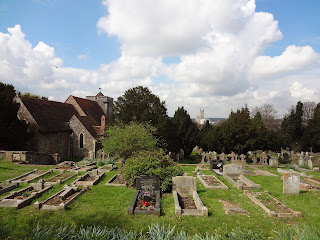 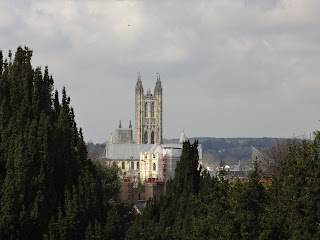 How I love those towers!

So let's take a little tour of the church, having wandered around outside it (admiring the Roman bricks but also, when I was there, waiting for it to open...). Come in this way: 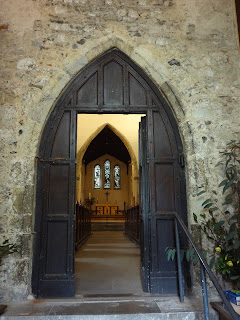 This part of the church is only (!) thirteenth century; the part used by Queen Bertha is the chancel, underneath which are the foundations of the Roman building. 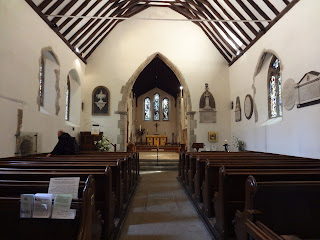 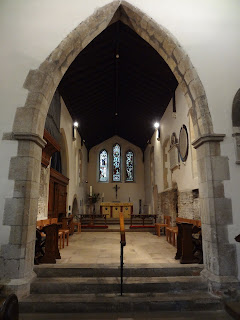 Looking back towards the west door: 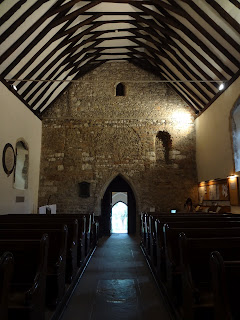 Within the chancel is this beautiful modern figure of Bertha, installed in 1997 in commemoration of the 1400th anniversary of Augustine's arrival. It was made by a nun of Minster-in-Thanet, the sculptor Mother Concordia Scott: 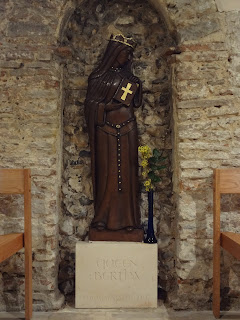 The wall around her is more Saxon work making use of Roman materials. 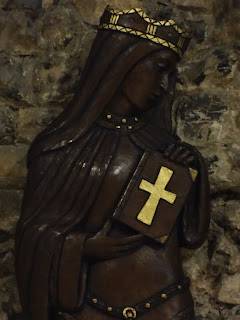 In case you were likely to forget: 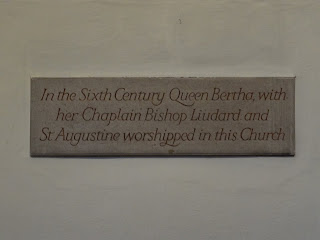 Not strictly Augustine-related, and almost modern by comparison with the rest of the church, is the Norman font, which was brought here from Canterbury Cathedral: 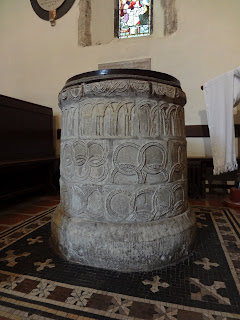 It's made of Caen stone and was probably made at the time of the building of the Norman cathedral in the last quarter of the 11th century. The guidebook compared the carved arcade along the top of the font to the pillars of the crypt at the cathedral, the oldest part of the present building. 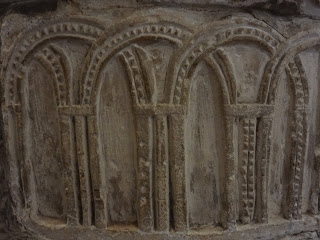 Columns and arcading I know nothing about, but I was excited to think that perhaps Anselm and Eadmer and Osbern had seen this font.

There's some nice stained glass in the church too; this of Bertha: 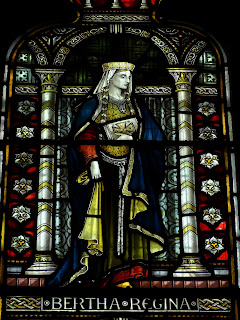 Complete with Saxon plaits, as always!

This is her daughter Ethelburga, who married Edwin of Northumbria and helped to bring about the conversion of the north of England to Christianity: 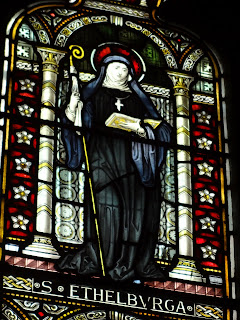 The story of Augustine's arrival is depicted at the east end of the church. Augustine arrives at Ebbsfleet:

(Though I'm distinctly unconvinced by those red rocks, hardly a fair representation of the brilliantly white cliffs which overlook Augustine's landing-place...) 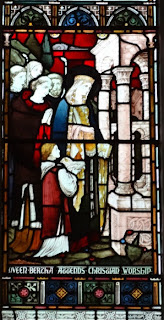 Augustine arrives in Canterbury, with an extraordinary physics-defying thurible:

And finally, King Ethelbert is baptised by Augustine, in a font evidently inspired by the one in the church: 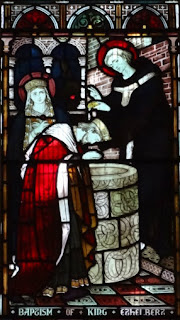 Thank you for this informative post.
I am preparing a research paper about 5 saint English kings so this information helps me a lot. Wouldn't you mind if I take some of your photos for my study? With links, of course.
Sorry for my English because I am from Russia ( but the last two years I spent studying the English language because I'm planning to be computational linguist)
So, thank you again,
Vera S.

Hello Vera - as long as you give credit with the photographs, you're welcome to use them! Good luck with your research paper.